I again participated, but this time, using Flixel as it is obvious that using an engine that creates binaries for each platforms hampers the potential players to actually play the game.

I know I don't download the few that are compatible with Linux, but I play most that are played online. 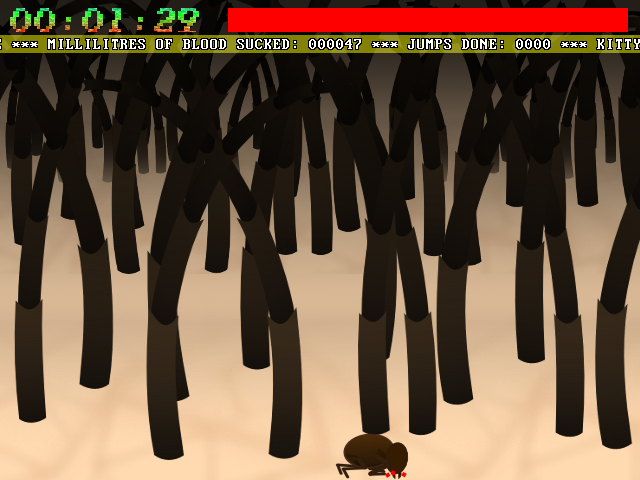 Using Flixel again (first used it in 2009) after being used to work with our own engine seemed awkward. There are some things they do that are nice, but other things are awkward. I did not make a list, but off the top of my head, you cannot know what animation is playing, only the frame of the animation if you're not inside the object (protected property). The sound engine is also greatly flawed since it uses Flash for audio, thus using mp3 files. Mp3 files automatically have a gap at their start, making the sound fire off a little bit too late. I hacked flixel a bit to start the sounds sooner, but the decoder delay of flash also kicks in. Supposedly using Flash CS4 you can create a fla and a swc which are made to not have these issues, but it was impossible

I'm working under Linux, working with flash under Linux is also very awkward. At least there's the Flex SDK that allows compiling, otherwise there would be no IDEs that could properly build flash projects under Linux.

Turns out two IDEs are available for Linux. There's FDT based on eclipse, which I did not try and there is Jetbrains IDEA Ultimate Edition which has a really nice Flex/Flash/AS3 set of plugins. Saying plugins is almost a travesty, as it is really integrated, it is a plugin that ships with IDEA. The only downside with IDEA is its cost, and it is a closed-source application. There is a community edition, but it is limited to some languages and no support for AS3 within it. I will definitely look into using IDEA Community Edition if I ever need an IDE which has support for the languages it supports.

I still did my graphical magic with The Gimp and Inkscape.

The sound design was done with as3sfxr; my SDL-based installation of sfxr did not want to start and did not spit any debugging informations. Still, this works just as well.

Not much came out from that fourty-eight hours of labor. Still, the gameplay works, but it is only "hard" because of bad hitbox management. I did not have time after making the attacks work to fine-tune the game. The attacks were almost entirely done in the last hour. Otherwise, I quite like the look of the game.I wanted to make the top busy and have a feelink that too much things were happening at once. Still, the controls are easy to use, even though the jump mechanic uses a realistic approch, where you cannot change the trajectory in the air. Once you've jumped, you commit to that jump and you better hope it won't kill you.

There's one thing that might bug you (hey, bug, like a flea); the scale is wrong in this game. I did not really look into the scale of things when I though about the concept, and turns out I'm way wrong. I also wouldn't have known how to represent a flea on fur with the right scale. There's also the fact that I had a different game mechanic I was thinking about when I made the graphics. That mechanic was scrapped since it would have been way too hard to do.

You can vote on the game if you also participated in the competition. If you didn't you can still check out the other games. Surely some are going to please you.